Keep a Look Out for Hedgehogs and Wildlife

We were delighted to find a hedgehog in our garden last year.  We’ve never seen one this high up before and often wondered how we could encourage them to our veggie plot.

Hedgehogs are meat eaters that like to snack on slugs, caterpillars, beatles and earthworms and we certainly have a supply of those little critters as organic gardeners.

We’d sadly seen dead hedgehogs at the side of the main road down below, but not a hint of one up here, dead, injured or alive.  Then out of the blue, as we were locking up the chickens one evening towards the end of last summer, we spotted a one eyed fellow tucking into the chicken pellets.  I can’t begin to tell you how excited we all were.  Every evening for about a month we caught sight of him somewhere near the hen house and were careful not to alarm him.  Ian nicknamed him ‘One Eyed Jack’ and we encouraged the children to stay up (not difficult) and watch him snuffle around the pen at the back of the house at the weekends.

As the nights were drawing in we dug out an old guinea pig hutch, and half buried it in the undergrowth close to the hens in the hope that ‘one eye’ would find it and hibernate. Sadly, when we took a peek a few weeks later, it was still empty.

And then one evening this summer as we were putting the hens to bed, underneath the hedgerow we spotted a hedgehog.  We’re not sure if it was ‘one eye’ – we couldn’t get close enough to tell as she/he was under the prickly Rosa rugosa. It was definitely a hedgehog though and not an old broom.

So hopefully this little fellow will find his/her own place to settle for the winter months and we’ll get another peek next year.

I like the idea that wild creatures are able to live around us, and we’re barely aware they’re there.  We’ve seen a couple of badgers within a mile of us but wouldn’t have a clue where their set was.

We often see signs of foxes in the garden and one day whilst I was working at the computer, I looked up to see two young ones frolicking in the field opposite.

One of our favourite discoveries this year was when we were clearing the main crop potatoes and unearthed this little fellow. I was surprised to read that most amphibians here (apart from newts) only need water for breeding, leaving it to spend most of the year on land. There they feed on flies, worms and other invertebrates in the shelter of nettle beds (so another great reason for not having gardens that are too tidy!). That would explains why we sometimes see them here even though we don’t have a pond, just a natural spring down the lane.

If you’d like more information on hedgehogs, with interesting facts and diagrams on building your own hibernating shelters, check out the British Hedgehog Preservation Society. Hedgehogs hibernate around October/November time, often in compost heaps or wood piles, so bear them in mind when you’re tidying up the garden before the winter.

Excellent for beginners, covers all the basics for the newcomer to gain confidence. 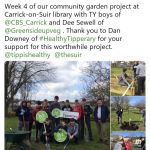 I found the workshops very informative and useful. I wish I’d done them prior to starting to dig! Loads of great tips

Any cookies that may not be particularly necessary for the website to function and is used specifically to collect user personal data via analytics, ads, other embedded contents are termed as non-necessary cookies. It is mandatory to procure user consent prior to running these cookies on your website.